Ahhh, finally found the time to finish something! So back around 1990, I discovered Blood Bowl 2nd edition while living the life of an unhappy college student in Waco. Already having most of a Skaven army for Warhammer, I immediately collected a team of the little rat men. Of course, these being showy little American Football analogues I just couldn't paint them in dirty drab colors like their army brethren, so armed with a lot of red and yellow craft paint I happily holed up in my crappy little one bedroom apartment and painted them.

MANY years later, I have decided that most of the paint jobs aren't all that presentable for the newest version of Blood Bowl, so into the Simple Green most of them went to await a more modern look. I decided to paint my Rat Ogre first, as he was about the only miniature on the team who never got finished all those years ago - no idea why I didn't, either.

So here he is - my Warhammer Fantasy Rat Ogre stand-in for the Skaven Blood Bowl team, the "Warpington Ratskins". 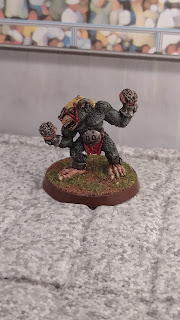 With his weird little helmet and chain-wrapped fists, I always thought he looked the part of a BB player. Paints are a combination of, well, everything - craft paints (yes, still!), Reaper, GW and a very old bottle of AD&D paints "mold yellow" (which is my favorite yellow at the moment, and I'll be sad when it's gone). 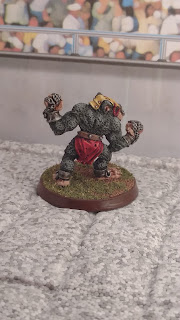 Even though he's pictured on a venerable AstroGranite (tm) pitch, I base all of my players with grass and dirt, which matches most modern BB boards. I actually like how he turned out - glad to see that I can still paint when I take the time to! 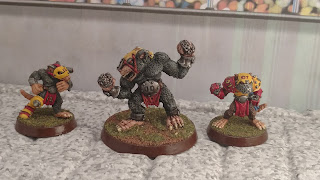 Last, here's a shot of my freshly painted Rat Ogre with two of his little brothers, a lineman (kicker, originally) and blitzer respectively. These two are the only ones that I spared from the Simple Green bath - I am still ok with how they look, even though they're a bit brighter overall than the RO. Back then, I really liked my paint jobs as obnoxiously bright as possible.

Well, I've already started four more linemen - hopefully they'll be done before the start of the summer semester (jeeze, am I ALWAYS in school?) If these two guys start to really stick out, I may have to get them in the Simple Green too.

EDIT: Annnnd I forgot his earrings - it's always something...
Posted by Gitkikka at 10:41 PM No comments:

Yes, yes - yet another post about something I painted a couple months ago, but it's new to YOU, good reader!

Two 'orrid little Citadel skeletons from their old Fantasy Tribes line. These were literally among the first miniatures I ever owned, being given to me by my parents for my 13th birthday. Yes, it took me 34 years to get around to painting them.

Not 100% happy with how they turned out, but then again, they're pretty rough sculpts. However, seeing them painted on my desk never fails to bring a smile to my face, as it reminds me of when this whole "Gaming" tomfoolery was a new and wonderful unknown to me. 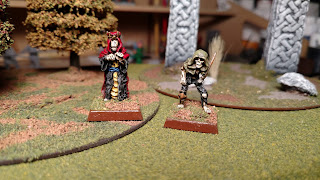 By today's standards, these are some seriously dinky little guys - more like halflings in their proportions. I tried for a dirty, faded look on the clothing, but making black look anything other than overhighlighted is currently beyond me. Add some rust on the metal and some gold on the crown (Liches LOVE crowns) and my oldest gaming companions are complete.
Posted by Gitkikka at 4:44 PM No comments:

Remember How I Told You I'd Improve My Photo Skills?

I lied, because nobody got time for dat.

No time to paint anything new either, with me attempting to keep my head above water in school these days. So it's not a total loss, here's a chap that I dug up for a photo op, despite having painted him in 1995. 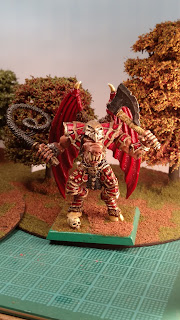 Yes, we loved the high gloss sealant in those days, along with the obnoxious green base rim. Obviously, my color scheme was highly influenced by the painted Bloodthirster in the RoC "Slaves to Darkness" book (love that one!) Eventually, this guy will get a dull coat and a less, er, obvious base. I usually paint fantasy-type miniatures with a brown base rim these days, so he needs to match. I intentionally chopped off his helmet spike, though - it just seemed off to me. Still does, really.

Amusingly enough, I have been trawling Ebay for another one of these guys, but with the different body style (the right arm raised above the head one). Too bad most sellers seem to think they're made of gold!

Tune in next time for false promises of new content and improved photography!
Posted by Gitkikka at 5:16 PM No comments: