Well, I didn't have a week and a half long nap - I managed to jack up my back somehow which made painting nigh-impossible though. Being hardheaded, I tried to finish the skeletaurs anyway but all I managed to do was make then look terrible. My back's better now, so I'll try to fix them a little and be done with them.

I did manage to do other hobby-related things, however: 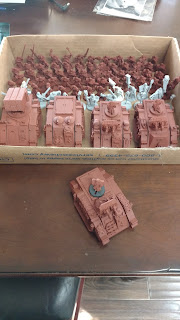 That's about 75% of my Adeptus Ministorum force, assembled and base-coated. This will most likely be my main 2018 project, now that 40K is reasonably playable again. I have about 17 Seraphim and a handful of characters (extra Sister Superiors and a couple of the older sculpts of the Cannoness, which will count as SS with combi-weapons). Once money starts flowing for me again, I'll hunt down 2-3 more old style Rhinos, a new-style Rhino body to go with the new-style Immolator bits that I have for some reason, and a metal Saint Celestine. I like the new plastic saint model, but the whole "I have toilet paper stuck to my shoe" ribbons put me off. More basic sisters would bee good too ;)

Here's how they'll eventually look. I painted these about 5 years ago, and then avoided the army because the red I wanted to use took several coats to get good coverage (Poly-S Rock Island Red, I think). Fast-forward to a year ago, when I discovered that Wal-Mart was selling spray cans of a Krylon primer that matched the Poly-S paint almost perfectly! Yes I bought them out, and true to form, WM never carried that color again. Fuckers. 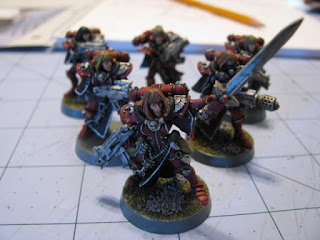 Well, time to finish a couple crappy skeletaur paintjobs.
Posted by Gitkikka at 1:30 PM No comments:

There Goes My Last "Good" Excuse!

Anyone who has visited here knows that for the past year(ish), I have been yammering on about how I didn't have the drive to paint due to Rad Tech school, and the fun of clinicals. Well, I've since graduated, got certified, am legal to practice in the state of Texas, and after one very happy phone call yesterday, I now have a job at the hospital that I really wanted to work at (pending their sift through my "sordid" past :D ). Can I feel settled enough now?

More interesting, I'm starting my shift Fri, Sat, Sun - 10am - 10pm, so four days to get paint in! No excuses except for my laziness, which is the strongest hurdle of all. I think I'll finish off those Grenadier skeletaurs that are sitting on my desk now!

Everything Old Is New Again

Recently, Reaper Miniatures announced that they were sort of reviving the old Dungeon Dwellers line that they took over from Heritage. This has piqued my interest, as, when I was a tiny troll, my collection was primarily made up of Heritage and pre-slotta Citadel miniatures. Their first offering to the line is a new skelly sculpt named "Rictus the Undying" which does rather recall those old Heritage sculpts. In a wave of nostalgia, I managed to remember that I still had these old fellows: 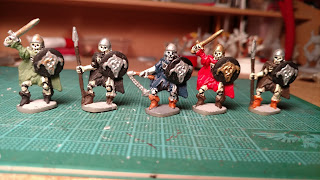 Yes, five "Denizens of the Dungeon" plastic skellies from Heritage, in full '80s paint job glory. Sadly, (sort of sadly, anyways - these minis were pretty awful, but cheap) I only have these guys left, where once I had all four sets that were made. I especially miss the ogre that came in one of the boxes.

This nostalgia got me to digging around in the oldest of miniature vaults, in search of all the metal Heritage minis that I still have. Surprisingly enough, there are still quite a few lurking around so readers might be subjected to old "Eh" sculpts with my current painting skills in the coming months. Not these skeletons though - they get to stay this way forever.

But that's not the only reason I'm posting tonight...

While digging in the Deep Vaults, I came across an old conversion that I did in the late '80s or early '90s that I had somehow forgotten about. I remember that Warhammer 3rd Edition was fading out, but still the current ruleset. I believe that I was putting together a Khorne army from Slaves to Darkness, and wanted a unit or two of chaos dwarves. As I couldn't source any of the excellent metal ones that were out at the time, I decided to convert my own from the dwarves in the plastic Warhammer Regiments set (yes, the shockingly white plastic ones). Well, me being an ADD doofus, I only managed to convert about six or so (mostly head swaps, although I do recall giving one a skaven head and tail), and of that, only painted one.

But what a one he is.

May I present the standard bearer of "Da Bugeyez" - the best conversion of the lot: 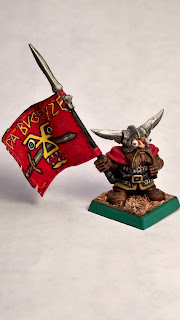 Quite a sight, isn't he? Let's see - Warhammer Regiments dwarf with RTB01 space marine combat attachments in place of horns (why not), the ends of the cross piece of an early space marine back banner pole for eyestalks, and the lance of an early Roughrider for the banner pole (I think these pulled double duty for High Elf knight lances, as well). 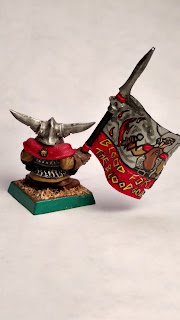 What the rest of the unit sees. Yes, that IS his picture on the back - he's a bit full of himself.

I don't think I ever got too far with the army overall - 40K kind of overshadowed Fantasy pretty quickly with the local gaming group. This guy still had work though - I had need of cultists, and at least one friend fielded Chaos Squats.

Ah nostalgia! I think I'll put him in the display box for a while to scare the cats. 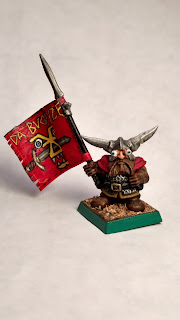 "Watchoo lookin' at?"
Posted by Gitkikka at 5:04 PM No comments: