Almost didn't post this one - this pair of miniatures gave me all sorts of shit during the painting process (see "Sometimes We Hate Our Children"), and I couldn't get a decent picture of them no matter what I did. Yes, yes, I'm still using my phone camera; but the Galaxy S9 takes good pictures of everything ELSE, just not my miniatures.

As much as I wanted to dump these assholes back in the Drawer of Shame, I'm trying to push forward with the "Fuck it - Just finish" mentality, just to say I'm getting shit done.

So here you go, imaginary reader - a dual lascannon Tarantula with operator for my Planetary Defence Force (of planet Frumunda): 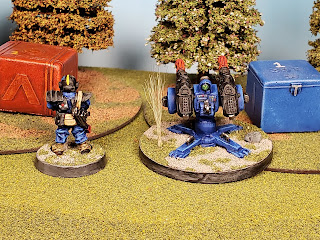 Black and blue? Why not? Back in 1989, this color scheme was going to be for my Imperial Guard army, which I shelved after painting an entire squad worth. (I really hate painting large amounts of black, it turns out.) About 5 years ago, I started another IG army out of the now OOP Wargames Factory Greatcoat soldiers (also shelved), so I just said that these old Guard guys were going to be part of a PDF somewhere, probably with a Squat force attached as allies (it all counts as a Guard force, games-wise).

The Tarantula itself came into my possession loooong ago, partially broken and caked in green paint. The operator only had a couple areas painted on him, so he wasn't in bad shape. You may notice that the parts that hold the lascannons are a little shorter than they were when the model was new - that's because the broken part had to be trimmed down, so I did that to both sides so they matched.

I had to drag out one of the finished guys so that I had a reference:

Sometimes, I think I was a little better back then...
Posted by Gitkikka at 9:57 PM No comments: