I decided to take a couple pics of Trooper Bush for posterity, so I can compare the old paint job with the new (whenever I get around to repainting her). Fortunately, she was only in SG for 10 minutes at that point, so no damage to the paint just yet. 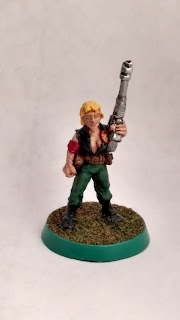 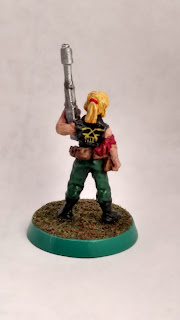 Actually using my photo setup makes a difference, it seems. Still using the cell phone, though.

Not too sure what I'll do about her gun, though. Bunging a plastic lasgun barrel to the miscast part didn't really work out last time. Might just give her some sort of sawed-off gun next.
Posted by Gitkikka at 7:27 PM No comments:

Where Trooper Bush discovers that Space Marines have finally grown into the size that the fluff describes them: 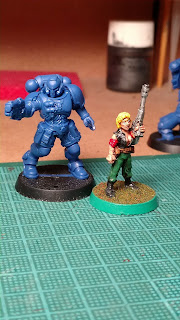 Upon making this discovery, the good trooper suffered from a bout of self-awareness about her 20+ year old rushed paint job and hopped into a vat of fresh Simple Green. I've never been happy with her paint job - much less by the fact that the miniature was a miscast and I did a hack job of repairing her las gun. Originally, she was meant to be a Chaos cultist, but now I'll just repaint her to match my old blue-and-black Planetary Defence Force.

While it's not a great paint job, the gloss coat and my cell phone really conspire to make it worse. Might be time to steal my wife's nice camera.

BB Skaven are still in the queue (yeah, yeah...), but I'm just assembling the new WH40k 1,000,000th Edition (I've lost count at this point) miniatures because I like how big the marines are now. Plus, it gets my hands steady again so I can do the real work of painting.

Posted by Gitkikka at 7:04 PM No comments: