What makes a lich(e), a lich(e)? For those of us who grew up with the first edition Monster Manual, we would say it's a nice crown, perched up on his bony noggin. I mean, look at this guy: 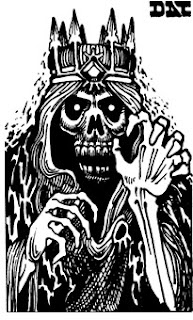 What do you notice? The glowing eyes? The spooky skull? The impending threat of being tickled? No! It's that stylish crown.

Which brings us to THIS guy: 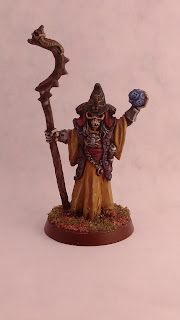 What are we looking at, here? All the hallmarks of lichitude are there, but what's the deal with the hat? Is he, in fact, an undead London Metropolitan police officer? Where's the sweet, sweet crown? 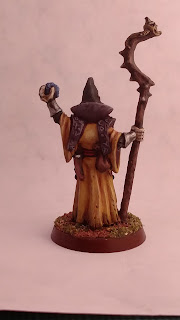 All kidding aside, I am one of those weirdos who like most of the miniatures that Trish and Aly Morrison and Colin Dixon made for Marauder Miniatures. This lich is probably my favorite of the lot. Kind of different from what one would usually expect from the typical undead sorcerer, with a slightly goofy aura about him to offset the menace. I swear this miniature was the inspiration for the infamous Nagash miniature.

My plan here was to challenge myself with a palette that I don't usually use. Evil undead wizards usually dress in ominous reds and blacks, but why not one in yellow? (I've been using yellow for my BB Skaven, but not as much on one miniature as with this guy.) For the second color I added purple, which is a color that I hardly ever touch - I painted his collar and stole(?) with Reaper's Faded and Bruise purples. I'm not super happy with how it turned out, but I'll put that down to inexperience with the color.

Like most Marauder Minis, this guy is pretty big: 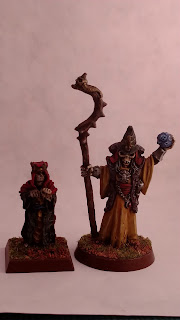 Granted, he's standing next to an old, old Fantasy Tribes lich (note the crown!), but the MM lich still holds his own with most of today's minis.

Gee, I wonder where the FT lich got his pose from? 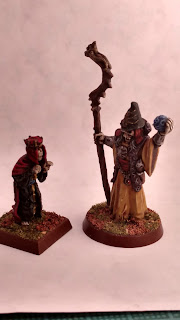 The next time I paint up a lich (and I will, because they're one of my favorite monsters) and it doesn't have a crown - WELL - I'll give that lich a crown...