Oh yeah - I finished these a while ago and forgot to post them, oops.


Four piddling Skaven linemen from 2nd edition Blood Bowl. Nothing fancy here - paint, wash, and messy-assed highlights (in other words, my usual SOP). I'm not really that great a painter anymore - age and lack of practice have taken their toll - but I really need a better camera. My phone makes them look worse than they really are.


When these were cast, GW was having some serious trouble with quality control (at least from my perspective). Miniatures with slipped molds, miscasts, and missing or wrong parts got to the shelves on a regular basis. The set that these linemen come from was no exception. These four represent the worst of the lot - a couple had bad mold slippage, which I fixed as best as I could. The Skaven without gloves appears to have a ventilation thread on his right hand which I missed (he was covered in them before I painted him). At least they're painted!

I'm already chugging through some positionals (thrower, "gutter runners", etc.) I'll put them up whenever :) Unfortunately, my school break is ending this week, so it's back to the grind I go on Monday. I'll do my best to make time for the hobby, as it mostly keeps me happy and calm(ish) during stressful clinicals.

Ah well, time to do something about that ventilation thread on number 13 :(
Posted by Gitkikka at 4:15 PM No comments:

Sometimes, We Hate Our Children

Spring semester is done at last, and I passed quite handily. To celebrate, I threw paint at the first unfinished miniature on my desk that I saw. Unfortunately, it was...this guy... 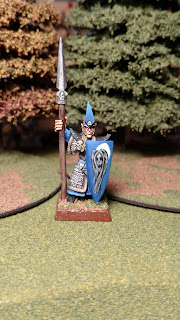 This Dark Elf spearman has a weird history. I actually started him about 10 years ago for whatever edition of Warhammer was around then (I actually got the miniature faaaar longer ago that that). Mostly because I didn't like the edition, and because I was well into 40K at the time, I abandoned him just before the wash stage. Several months ago, I pulled him out with the intention of finishing him and converting him and the army he came with into a Kings of War list. Cue school and no time to do anything.

Well, school's out and painting happened. Well, it's more accurate to say I "painted at" him, anyway. If I could drop this asshole, I did. If I could mess up the highlights, I did. If it could go wrong, it did. To cap it all off, I failed at painting his eyes SIX goddamn times before I gave up. Yes, after all these years and miniatures, I finally finished one without doing his eyes. I blame age. 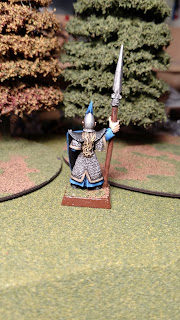 Orlygg at Realm of Chaos '80s wrote about having our own Miniature Moriarty, and this bastard is definitely one. To keep this post from going too negative, I'm happy that I got the "Moon and Banshee" shield device right on the first try. Only about 60+ more to go!

So yeah, I don't love this guy too much right now. Best to put him away for a while so I don't have to see him and work on my BB Skaven next.