Productive (for me) night last night.

This is Reaper's Undead Outlaw miniature. I'm not much into Old West stuff, but this guy is pretty bad ass. I've had it for a few years without planning on doing anything with it, but last night I needed a "palate cleanser" from Skaven and he made it to the top of my list.


Even more incredible, I actually finished it in one day - I haven't done that in quite a while (the Reaper Bones ratman from October doesn't count, as it sucks.)

Fairly random color scheme - the only "have to have" color is purple, as that has become my theme color for my undead. I was afraid that the sand color for the duster would be a bad choice next to his bony bits, but keeping it a warm tone to the cold tone of the bones fixed that. Pretty pleased with him overall.

Cool miniature - actually makes me want to work on a Weird West project.
Posted by Gitkikka at 9:20 AM No comments:

Yep, tonight is another cheat. I got my hands on some of the nice new plastic bases that come with the latest edition of Necromunda recently (as well as some indifferent looking plastic gangers :P ), and wanted to see how they would look with one of my old Necro minis on it. As luck would have it, my faithful old Hive Scum ("Blondie") was in need of having his plasma pistol replaced, so I pushed him to the front of tonight's queue:


Like a large percentage of people who painted this guy, I immediately thought of Clint Eastwood's "Man With No Name" character and so painted him accordingly circa 1998. At the time, I lopped off his left hand and replaced it with a rather chunky plastic Ork plasma pistol, painted fire engine red (my preferred plasma weapon color back then). It never looked right throughout the years, so I snapped it off and replaced it with a Space Marine one. Still pretty chunky, but it looks better to me. I tried to find my old Confrontation pistol sprues to use a plasma pistol from there, but I think this one fits the Marauder Miniature ascetic pretty well. Said pistol is now a low-profile black, reasoning that Blondie doesn't want to call attention to the fact that he is probably carrying an illegal or stolen weapon. 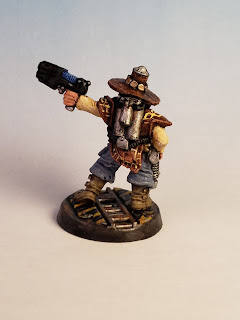 As you can see, I attempted the cool kids method of painting glowy bits on the gun (no OSL though, I am not a Golden Daemon painter!). Probably needs to be brighter, but - eh.

I worked the base to look as nasty and gross as any floor as one would find on the Hive Bottom. Rust and paint chips show that the maintenance crew hasn't been this way for a few millennia...

In the end, I'm not a fan of adding to/painting parts of already painted miniatures. For some reason, I tend to rush through the work even faster than I would painting a miniature from scratch. The gun is pretty minimalistic (kind of the point, but I went a littl TOO much so), and the base looks too busy. In the future when I start adding my old Escher gangers to them, I'll probably skip the fancy hazard striping.
Posted by Gitkikka at 6:04 PM No comments:

One Day I Will Paint Something That Isn't Skaven Bloodbowl Stuff...

New phone, new bad photos. To be fair, it's a quarter to 3 am here, and I'm on call this week (I was already called in four hours ago for a procedure that ended up not happening), so my photography is worse than usual. Glad to be done with these guys, they sat around too long.

Now that I feel settled into my shift, I have realized that I'm more open to spending large amounts of time painting - with four days off a week, I better be painting.

Those two that I painted around 1990 are really starting to stand out, now that the rest of the team is getting finished. Doubt I'll do anything about it - I still like how they look, and it's a nice reminder on how my work looked back then.

Looks like I need a bigger backdrop too...
Posted by Gitkikka at 12:55 AM No comments: