Another quick slapping-on of paint - this time a teeny-weeny Battletroops miniature from Ral Partha. Way back when the game came out (1989 or so), I bought into it pretty hard; the original rules, the Clantroops (Clans, *puke*) expansion, and both boxed sets of miniatures, Kurita and Steiner. Well, my group and I played about three games and decided we didn't like it, so into the footlocker of shame they went.

Nostalgia being a thing, I recently dug the miniatures out and decided to actually paint one, just to see how the uniforms as presented in the sourcebooks look in 3-D. The Draconis Combine (House Kurita) being my absolutely favorite successor state in the Battletech is what pushed to choose this guy. That, and the Steiner uniforms are hideous.


Now, the descriptions in the sourcebook describe the undersuit as being tan, but the pictures all show it as being a closer-to-orange color. Interestingly, I have an old Ceramcoat paint that is almost an exact match. 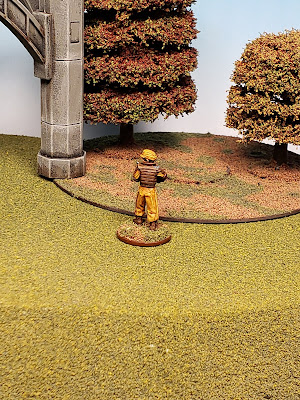 It has been a good long while since I painted something with the tiny scale/proportions of a Ral Partha mini. Going from chunky Citadel to this was a great challenge to my poor old eyes - needless to say, the paint job is a bit, er, abstract, and I didn't even think about HIS eyes.


One thing we never tried in the three games we played was to use the rules for 'Mechs in Battletroops. Yes, 'Mechs. In an infantry game. Not too sure if we were worried about how hard that would be, or if we were just bored by the fact that the 'Mech is represented by a flat, square templare. Yaawwnn. Me being a dumb-assed kid at the time didn't realize that I had a few 'Mech models at my disposal in the form of Robotech toys (which I e-bayed off quite a while ago ;/). Nostalgia still continuing to be a thing, I recently bought a little buddy to go with my Battletroop miniatures, should I decide to continue with them: